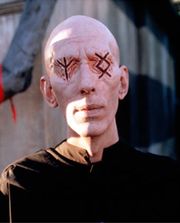 This is a Harbinger of Death from Buffy the Vampire Slayer (the TV series). As the wiki describes them, they are “blind, with their eyelids covered by rune-like scars”; or, as I would describe them, runic scars. Those are perfectly fine runes, apart from their replacing someone’s eyes. The runes are also from two different runic systems. The left one (the Harbinger’s right) is either a z (probably for a mystery sound between r and z with a bit of i in it) from the older futhark or an m from the younger futhark. The other one is an Anglo-Saxon ng.

Using runes fits well with making the Harbingers look sinister (again, the eye thing also helps) and with roots in some ancient mystery. I doubt any deep thought has gone into the choice of the actual runes involved. They’re nice and angular, and the asymmetry in the face adds to the uncanniness of the characters.